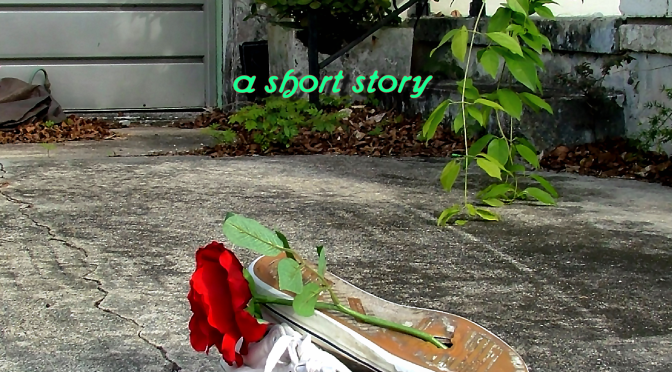 Forty-five minutes later, Gary and Shawn sat around a wooden table at the Yoyo Crunch Bistro with two statuesque looking women in short dresses. One was Sharon, the blonde guy-hopper who apparently liked peanuts, and the other was Erica, the raven-haired bartender chick who favored salsa and chips. Sharon talked and talked at Shawn while he silently dragged his fries through his ketchup. Erica sat next to Gary with her hands folded, staring at him for over a minute. He felt quite uncomfortable being here with her, and somewhat cheapened to boot. He took a sip of his drink.

“So what’s your story?” said Erica.

“It’s long,” he said. “Maybe it would be better to talk about aerobics or something.”

“No, I just think it would be better than talking about me.”

Erica smiled at him and ran her fingers through his hair. He quickly pushed her hand away.

“Okay,” he said, “let’s get something straight here. Don’t use me. If you already got a boyfriend, don’t waste your time stringing me around. Don’t buy me shoes, don’t call me at midnight, and don’t paint my living room walls. If you wanna touch my hair, you better be ready to walk down that church aisle with me. Got it?”

He watched as Erica shrank backward. He could see the awkwardness racing across her eyes as she looked at her friend with loosely clenched teeth. Soon, the image would freeze in his mind, and he would feel like a bigger idiot than he had in all his life. He figured it was prudent to get ahead of this before it turned into a fiasco, if it hadn’t done so already. Shawn confirmed by shaking his head.

“Look, I’m sorry,” Gary said. “I just got dumped by a girl today who never really dumped her last guy. I’m in a lot of pain right now.”

She looked at him with her eyebrows arched.

“Then why are you here with me tonight?”

“Shawn just needed a third wheel. I’m sorry, but this isn’t right. Shawn, I have to leave.”

Shawn glanced at Sharon and shrugged.

Gary and Shawn got up from the table. Shawn wiped a napkin across his face, set it down, and reached in his pocket to pull out fifty dollars. He handed the money to Sharon.

She set the money on the table and smiled.

“You gonna call me later?” she asked.

Shawn straightened his jacket as he stepped backward.

Shawn turned his back to her and left the table. Sharon’s nose wrinkled as she reached for her dinner fork in preparation to chuck it at him. Gary stood in the way.

“Don’t take it personally,” he said to her. “Shawn doesn’t have it all together if you know what I mean.”

He looked at Erica, trying to keep his eyes tougher than that of a puppy dog’s, but not so much as to lead her on the wrong way.

Erica smiled at him.

“If you change your mind, I’ll go out with you again.”

Gary nodded. He wasn’t sure if he felt any better.

Gary turned his back and followed after Shawn.

As Shawn sped down the highway in his black Mustang, Gary sat in the passenger seat, staring at buildings and lights passing him by. The Backstreet Boys song on the radio, the one about a girl and how she made the current singer feel, sickened him and made him want to rip his hair out from the roots. But he endured it because his night couldn’t have gotten any worse, and the only way to make it worse was to piss off the driver who apparently liked their music.

Shawn turned off the radio.

“I hate the Backstreet Boys,” he said. “They make me want to rip my hair out from the roots.”

He glanced at Gary, but he couldn’t for too long since he was the one driving.

“What’s wrong, Gary? Feel like you blew it twice in one night?”

“Because you’re not gay?”

“That’s not what I mean. The only time I was ever truly happy was when I was with a girl who was using me. There’s something wrong with that. I’m just wondering what it’s like to just not think about anyone anymore.”

“Besides the fact that it’s impossible?”

“Well, for starters I would have to stop fixing you up with the friends of my dates, and I don’t know if I can handle that. But if that’s what you want, you’re crazy, but it might work for you.”

The reality was that Nikki was gone, and he couldn’t change it. Sooner or later he would have to let her go, even if it was next to impossible. But then, once upon a time he had to make the same decision about Victoria. Even though her motivation was different, Victoria had broken his heart just the same. Once upon a time he had been knocked into the mud by a girl, and a new girl had stretched her hand and pulled him out. More than likely, another girl, maybe Erica, maybe someone else, would reach out and lift him from this new pit. Holding on to Nikki was just a way of keeping himself in the mud. He needed out. He needed to let go. Perhaps this was the time to start working toward that goal. Gary rolled down the window and stuck out his head, screaming at the top of his lungs.

“Who needs you Nikki? Can’t you see I’m better off without you?”

He pulled his head back inside, breathing in and out heavily.

“Pneumonia is a passing whim.”

Shawn laughed to himself.

“My boy is coming around. Feel better?”

Gary stared ahead at all the nightlife reaching out for him. Building after building drew ever so closely, blurring together in a mosaic of lights. The traffic signals were continuously green, except for that one annoying one that didn’t even need to be there. He crossed his arms and smiled.

Shawn slapped the steering wheel. He had glee in his smile.

“That’s right,” he said. “Tomorrow’s racquetball day. You gonna be there?”

When Gary finally got home, his eyes sagged with exhaustion. The night was too long, but he got in his driveway safely enough. As he stepped out of his car, he looked to the street. He noticed that his shoes had fallen off the power line. Contemplating the phenomenon for just a moment, he stuffed his keys into his pocket and approached the fallen footwear now in the road. He knelt down, scooped them up with both hands, and stared at each one for a moment, trying to figure out what to do with them. At first he wanted to toss them back onto the power line to further forget about them and Nikki, but then he remembered that they were a really good pair of shoes, and that it would’ve been a shame to lose them. So he decided to keep them. He brought them into the house and laid them with his other shoes.

The next evening, Gary was still stung from Nikki’s rejection, but not as much. He decided to give Erica a call, just to see what could happen. He knew that the date could’ve been a failure. They could’ve hit it off, spent a year together, and then one ditch the other for no apparent reason, or for lack of a good reason. Or, she could’ve rejected him right at the start. The night before at the seafood restaurant could’ve been nothing more to her than a drunken memory; Gary could’ve been the faint recollection of a blurry guy she had been staring at from across the room, even though she was sitting right next to him. Calling her could’ve led to anything. And even though he was terrified of dealing with the next heartbreak, he just knew there was a chance—as slim as it was—that Erica was the girl who would keep him.

When he called her, she seemed happy to hear from him. She asked him if he was over his last girlfriend now. He told her the truth. She told him she was available for dinner if he wanted to give it another shot. He told her he’d meet her at the restaurant at seven. They would eat Tex-Mex tonight. As soon as they hung up, Gary found his white tennis shoes with the black trim and slipped them on his feet. He was going to try having a nice night with the new girl, with or without his old memories.