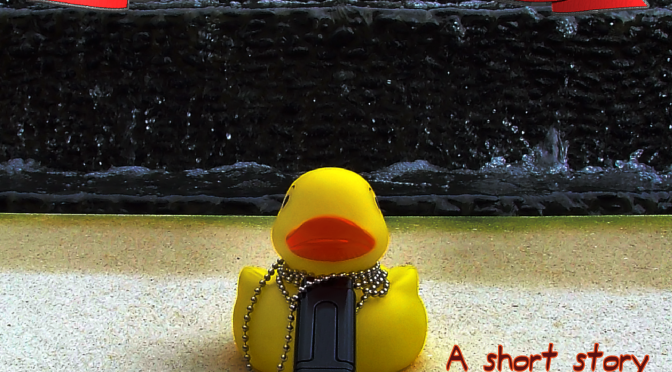 My name is Johnny and I found the duck while riding home from Oxford on a Tube train. Even though the note tells me I have to wait until something amazing happens to write my story, I think it’s better to do it now. Not to be a rebel or anything, it’s just…now’s the time.

When I was a small child, my grandfather gave me a rubber ducky for Christmas. He was my favourite grandparent, and I was his favourite grandson, and the two of us were inseparable. When he gave me that rubber ducky, he showed me how it squeaked, and he told me about all the adventures it could share with me. I was excited. My grandfather gave me more than a toy that year; he gave me a new friend.

When he offered me this gift, he reminded me that no matter where I went in life, or what might happen, that as long as I had the duck, I had my grandfather with me. He told me that symbols were almost as powerful as having the real thing it symbolised, and that I should always keep the duck with me if I wanted to keep my grandfather close. “If you love something, then set it free,” he used to tell me. “If it doesn’t come back, it was never meant to be.” Then he died.

I didn’t understand why he had given me this saying at the time, but now I do.

Heartbroken from the loss, I clutched my rubber ducky tighter than ever and vowed to never let it go. I was afraid that by losing it, I would lose the memory of my favourite grandfather, and I couldn’t allow that. So I took the duck everywhere: to school, to church, to the pool, anywhere I could hold onto it. I had even written my initials under the duck with permanent black marker to ensure it stayed mine.

Every year, I refreshed the duck with new ink to make sure the letters didn’t fade, and did so until I was seventeen. But then, something awful happened. I was riding with my family down a road along the Thames when my brother swiped it from my hands and threatened to lose it. He knew I was attached to it, but he didn’t care. Ever since I was ten years old, he had made fun of me for carrying it around, but I never broke my stance to keep it. That duck was part of my lifeblood, and to stuff it away in a toy chest would’ve been like closing the prison doors over my heart. It would’ve been like locking my grandfather out of my life. I stood up to my brother’s ridicule and carried my duck with pride. So when he stole it from me that day, I panicked. When I demanded that he give it back, he adamantly refused. I tried to wrestle him for it, but he got the better of me. Finally, when all hope seemed lost, he dropped the guillotine to finish me off. In one last effort to rid me of my crutch, my brother told me this was for my own good and then tossed the duck out the window. Although I tried to catch it, the duck slipped through my fingers and disappeared into the world. I begged my parents to stop the car so I could go back and pick it up, but it was too late. It didn’t hit the pavement like I had hoped. It flew into the river. As I looked out the back window with tears in my eyes and shoes in my brother’s face, I watched as the rubber ducky I loved with all my heart floated out of my life.

For six years, I tried to get its memory out of my head. I substituted my disillusionment with fake laughter, intense schoolwork, shallow friends and occasional alcohol. But I couldn’t do it. I missed my duck. Two years ago I finally broke down and bought a new duck, but it wasn’t the same. I ended up giving it to some kid who lived on my block. I didn’t know him, but his parents loved me for giving him the stranger’s toy—sarcasm implied. It didn’t matter. I just coasted through life trying to make sense out of the world. Then, one day I gathered up the nerve to pick a major and graduate. And that was recent. The whole thing felt like crumbs falling off a slice of bread, but somehow I made it—I felt hollow, but I made it.

I had a brief taste in hope the night I’d met Claire, if that’s even her real name. But she never came back. By the next day I knew my life was just a series of running gags. I didn’t know where to go from there. Fate was whatever it wanted to be, not what I wanted it to be. I’d spend the next two months thinking that. Graduation was ultimately as satisfying to me as eating sand. Yet, I kept going, right into this morning.

I got on this train thinking that somehow I had to find happiness in a career next, but I just didn’t feel like it. I wanted to go home, but I was scared. Truth was, I didn’t know what I wanted to do. And that’s when I found this duck.

The last thing in the world I ever expected was to find a duck on the floor of a Tube train, but here it is in my lap, waiting to send me off on the tail of its journey. And I have to marvel, not because it reminds me of the duck I’d once had, but because it symbolises a part of my heart that was ripped away during a difficult age. And I am writing my story before it even gets started because deep down I know that I have my happy ending. I don’t think I need to explain that, either. Something about this story has to be sacred to the one who owns it and let’s just say that you know enough.

As Johnny finished writing his part of the letter, he removed a black marker from his suitcase and popped the cap. As the aroma of ink flooded his nose, he flipped the duck over to see once again the faded markings of two initials, the first a “J,” the other a “G,” and traced them both with the marker. The stroke of his hand matched perfectly the shape of each letter and he smiled, because he knew, after a tremendous journey, his duck, and the symbol of his grandfather’s memory had finally come home, and now he could pick up where he had left off all those years ago.