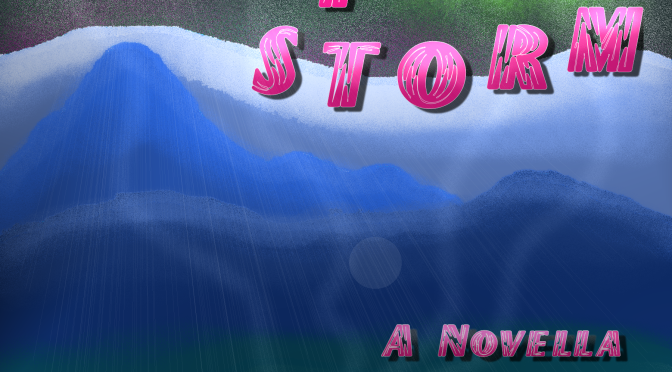 At the end of the day, Jake sat in one of the ice chairs in his hotel room, holding his open briefcase on his lap. There were now seven months accounted for in this project. His teeth chattered as he took a mental inventory of what he had on each roll of film. Besides the whale fins, muskoxen fights, and Kate the Supermodel shots, he also had polar bears attacking each other, a snow bunting riding a reindeer, and the leader of a dog sled team peeing in the snow to name a few. He placed the roll of film from the boating excursion into the slot marked for August.

“You know,” said Kate, as she walked into the room, “if you put the ox fur between your butt and the chair, you might feel a little warmer.”

“You mean you’re not enough to warm me up?” he asked.

Kate grabbed a fur blanket from the corner of the room and threw it on him. He didn’t feel like removing it from his head. Kate uncovered his face.

“Care to enlighten me?”

“You didn’t try to create an action shot with those whales today. I think you’re growing in your respect for nature, and yourself.”

“I think you got in my way. Those whales had no idea what was coming to them.”

Kate pulled the blanket aside, reached for the briefcase, closed it, and slid it back into the corner. She jerked the blanket out in front of her, spread it wide, and covered it around Jake’s body. Jake stood up slightly as she tucked it under his legs. He sat down again, feeling much, much warmer.

“That better?” she asked.

Jake nodded. It was kind of nice for her to act friendlier to him for once. He was sure it wouldn’t last though, so he figured he needed to milk it for as much as he could now.

“Do you think you could also bring me a drink?” he asked. “I haven’t figured out where they keep the refrigerator around here.”

Kate paused. Her eyebrows raised as she looked into his eyes.

“Will you be nice to me for the rest of the trip?” she asked.

“Only if you treat me with unconditional love.”

She paused another moment before answering.

Kate left the room. Meanwhile, Jake softly smiled to himself as he realized what he was getting away with. Here he was in the middle of Santa’s armpit, facing perhaps the coldest journey of his life, and all he had to do was to sit there and wait for a pretty woman to tend to him hand and foot. He thought back to his life in Arizona and how he never had this kind of random luck. Sure, the atmosphere here was bitter cold, and the job he had been given threatened to bombard him with horrible ice cube shots, but he was making the most of it. The fact was that he didn’t have to do anything but stay warm. Somehow he had even managed to bring the art of manipulation into the Igloo Hotel.

She came back a couple of moments later wearing gloves and carrying a glass made of ice. Jake could see that it was holding water, which suited him just fine. Kate handed him one of her gloves, and then handed over the glass. He felt the cold chill of the ice cooling his hand through the glove. He could only imagine how cold the water must’ve been.

“You’re welcome.” She had a mischievous look on her face, though Jake did not quite know what she was up to. “So, if that’s it, I’m going to bed now. I’ll see you in the morning.”

He eyed her suspiciously.

“Just that simple?” he asked.

She winked at him.

“Okay.” He wasn’t sure if he should trust her, given the look she had snuck into the tone of the conversation, but he was willing to anyway. It was too late in the evening to worry about implied meanings.

Jake watched her as she left the room. Almost immediately he noticed her gum like scent disappear and the chill of ice taking over his senses. That was okay, since he preferred to end the night on a good note. With that, he put the glass to his lips and took a sip of really cold water. Unfortunately, the ice stuck to his tongue.

So, that’s what she was hiding, he thought. He’d forgotten that one discussion they had had about science during that boring Save the Penguins gala they attended a year earlier. She knew her stuff, and clearly knew more than he did. After all his thoughts of random luck, he figured that maybe the water wasn’t meant to be so refreshing after all. Score one, Kate, he thought.

As he tried to figure out where he was, Jake felt a pair of hands shaking his shoulders. This couldn’t have still been a dream, could it? He knew he was bobbing around in his subconscious state, but how close was he to reality? The hands must’ve been in reality. Maybe if he opened his eyes, he would know the truth. But he didn’t want to. Opening his eyes meant dealing with frigid temperatures.

“Come on, Jake,” continued Kate’s voice. “They’re taking us to photograph the icecaps today. Wake up.”

Jake opened his eyes to see what looked like an image of Kate coming into focus. But his mind was so fuzzy that he couldn’t say for sure. He thought he was looking at a live-action Disney princess.

“Of course it’s me. Get up, get dressed, and get on the helicopter.”

“That’s what you said a half an hour ago. Get up. They won’t wait much longer.”

Jake’s mind began to clear, but he didn’t want it to. He reopened his eyes anyway. Kate’s image came more into focus. Why couldn’t she just go away and let him sleep in today? She grabbed his arms and pulled him out of the chair. Immediately, the rush of freezing air chilled his skin. He felt his nipples harden.

“Okay, I’m up already,” he said. “If you want me to be functional, too, I’d suggest you bring me some coffee.”

“Not likely, Jake,” she said. “The hotel manager has a thing about keeping his drink containers from melting. There’s a six-pack of Coke on the helicopter. Get your stuff and meet me out there.”

Kate jogged out of the room. Jake collapsed on the floor.

He reached for the fur blanket with his feet and pulled it down from the chair to his level. He wrapped himself up and went back to sleep. The darkness from the back of his eyelids soon transformed into a field of rolling hills.

His past as a warrior for a British kingdom had not been fully remembered since he thought he was an American from Arizona, but the toothless peasants in the countryside kept regarding him as a hero for saving them from the breath of the scaly dragon, so he decided not to second-guess it. He also figured he wouldn’t second-guess the fact that everything in the kingdom was mostly absent of color, with the occasional shades of purple and silver, because this was reality, and no one was going to tell him otherwise. After all, he had slain a dragon, and the peasants thought he was a hero for that.

The suit of armor he wore was remarkably light, even though it felt like it should have been as heavy as a boulder. Since the weight was not a hindrance to his movement, he decided to run toward the castle because he was anxious to meet the beautiful princess. When he reached the castle, he knocked the guards out of the way, figuring that they had better places to be than in his path. After a long dash up a spiral staircase, he found himself in the doorway of the princess’s chambers, where her handmaiden was braiding her hair.

“Good day to you, noble knight,” she said, as she smiled at him. “What brings you to bask in my presence?”

“I have conquered many things, Your Highness,” he said, placing his hand over his heart. “But there is still one thing I have yet to win.”

“Your heart, my lady; the most treasured of all in the kingdom.”

The princess waved her handmaiden away.

He stepped a few feet through the door. She beckoned him to come closer, so he did. Soon, he stood right in front of her. She placed her hand on his cheek.

“Your Highness?” he said.

“You are a brave knight and warrior,” she said, “who has conquered many trials in the name of this kingdom. You have come to conquer one last trial, and I believe you can succeed. However, there is just one thing you must do before you can even face the possibility of winning this goal.”

She wrapped her hand around the back of his neck, and brought his face close to hers. All of a sudden, her pale, yet beautiful complexion turned fiercely red, and the breath he never knew she had grew incredibly steamy.

“You must wake up before I strip you down to your underwear and bury you out in the snow,” she yelled.

“We’ve got one minute before the helicopter leaves without us,” she said. “Please get up, Jake. This is the only chance we have to go out there.”

Jake sat up and rubbed his eyes.

“Did you ever have a dream where you’re a hero?” he asked.

“Not lately, Jake, but if you get on the helicopter with me right now, you’ll be my hero. Okay? Let’s get going.”

She found his camera case in the corner next to his briefcase, and put it on her shoulder. Before Jake could demand that she hand it over to him, she reached out for his wrists and pulled him to his feet.

“Never mind that. Just walk to the helicopter with me. I promise, once you’re on, I’ll let you go back to sleep.”

She tugged on his wrists and pulled him toward the door. He lumbered on unwillingly. Where did she say she was kidnapping him to? He was too tired to think about it any further.