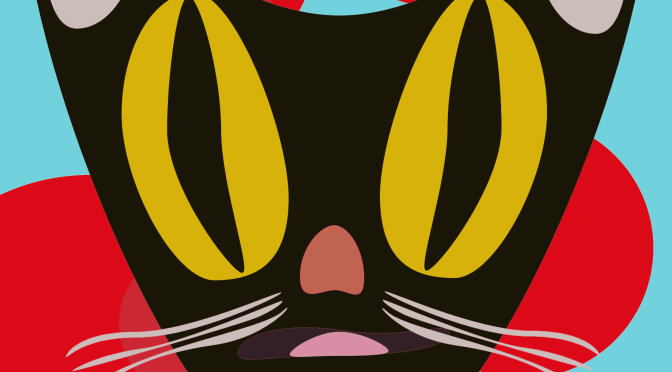 Sammy reopened his eyes a short time later to find himself staring through tiny holes at the sun-washed midway of attractions. As he attempted to bring his surroundings into clearer focus, kids cheerfully ran up to him and pawed at his body. Their “oohs” and “ahs” raised the hairs on the back of his neck. Among the gross lack of training he had received for this assignment, he had never received a training manual, either. How did one relate to children again? He searched his memories for his own childhood, hoping to connect with this demographic, but somehow his thoughts were lost in a haze of mental snapshots, of briefcases, of moussed hair, and of nuns armed with sharp rulers. Then he flashed forward to a more sensitive time in his life, but remembered how badly he had screwed that up, thanks to that faulty seat design he hadn’t fully inspected, and quickly put it out of mind. This wasn’t the time to dwell on that, or the seat’s Wacky Fuzzies branding. Improvisation would have to take control today. He had done it once before when he had to speak at a conference of Japanese investors without a translator, and somehow he had still gotten the message across, and the marketing contract. The same could happen here. Reluctantly, he opened his arms akimbo and let the young children give him hugs while keeping his focus on all the obsessively smiling people passing in front of him. A similar strategy had worked on the Japanese businessmen all those years ago.

“I love you, Bubby,” cried most of the children hanging from his arms. Having so many kids hugging him didn’t seem right. But the past was the past and this was business.

While his head continued to do laps around his neck, Sammy tuned out their squeaky voices and took step after step away from the souvenir shop. This was not working out well. He was getting swallowed in a flood. He tried to flick a few of the tykes away, gently, but they kept coming back in bigger droves. When he managed to get about twenty feet down the walk, the children happily jumped on his shoulders and brought him down to his knees. Rather than trying to fruitlessly wrestle with them, Sammy went limp and allowed them to roll him around. Sometimes improvisation required a little injury.

After a few moments of abuse from the kids, Sammy regained his strength and attempted to rise from the ground.

“Okay,” he said to the kids, feeling another bout of dizziness coming against him, “time to get off me.” He thought about using a “fuzzy” voice to authenticate the character, but decided against it when he realized how typical that would have made him. So, he just spoke to them in his regular acidic voice. They didn’t seem to notice the difference.

The kids continued to hug him and hit him, further bringing slight bruises to his belly and sides. Despite his floating state of equilibrium, Sammy, using all the strength he had left in his body, carefully stood to his feet. He tried to stay balanced, but found it challenging. With a couple of hobbled steps he struggled to hold his vertical position. His knees quaked and his toes clawed for the sturdy anchor within those giant synthetic feet. More kids continued to run up to him. Hungry piranhas wearing Nippy the Cat T-shirts. He clamped his elbows tight to his side out of instinct.

Desperate for relief, Sammy looked to his side. Perhaps a responsible parent could step in and reel the children away, if any such responsible parent existed. Or maybe one of those irritating clowns could jump in from behind a tent and spray them all down with a hose. But, no, he saw nothing like that beside him. Instead, he found a balloon stall nearby with many different round and animal-shaped balloons hanging from its walls and ceiling. He attempted to shrug; it was better than nothing. He lumbered toward it, waving his hands around like a blind zombie with a fear of failing deodorant. Of course, the kids scrambled to follow him. His steps were strenuous, but after a couple of tiring minutes of effort, he made it to the stall and collapsed against the counter.

The children screamed in his ears as they cheerfully demanded the balloons.

“What kind of balloons do you kids want?” he sputtered.

He didn’t listen to their responses. Instead, he envisioned either shooting his boss or shooting himself for taking this job. But bullets were not enough. Getting baked by the fierce heat and becoming consumed by the endless stream of childhood greed placed visions of shotgun shells in his head. He stared inside the booth to see the stick-figured balloon merchant laughing at him. Sammy was tempted to respond to the laughter with a fuzzy punch to her face.

“That’s so adorable,” said the merchant, revealing her polished whitened teeth. “I wish I had your job.”

Sammy wasn’t sure if she was serious or just sarcastic.

“Would you like to give these kids some balloons?” she asked cheerfully.

“Anything to get them off my back.”

“What? Oh stop, they’re adorable. Here, take the Gary Giraffe specialty balloon for the superest of these super kids.”

The merchant stood on her tiptoes and stretched. Then she plucked a giraffe-shaped balloon from the ceiling and handed the string to Sammy. He could not see the string clearly, so he ended up grabbing at air.

“Maybe you should give it to them,” he said.

The merchant nodded and passed the string along to the smallest kid. The kid cheerfully grabbed a tight hold of it and ran away calling for his mommy.

“Weren’t you going to ask that kid to pay for it?” Sammy asked.

The balloon merchant put her hands on her hips and smiled.

“Oh, come now. I have plenty more. What’s giving up a small price for a happy face?”

Sammy felt the strain on his back and shoulders getting sharper.

“Maybe you’d consider giving up about twenty more? I got money.”

The merchant flipped at his fake nose, which looked like a big red cotton ball from behind his eyeholes. He had no idea what the point was in her flipping his nose, but he decided to flip his big furry fingers against her nose in return. The merchant laughed at his action and flipped at him again. Her smile grew bigger and bigger. He realized he hated the balloon stall, too.

Sammy tried to fight his way back to the main walk, but the mob of children made it tough. As he struggled to move, he spotted a mirror standing next to a fortune-teller’s weight scale. In it he saw his wet and blurry reflection shining at him. Staring back through the mirror was a large, red, fuzzy cartoon bear, matted with shower water and surrounded with little screaming people. By looking at the children hanging on his back, he estimated he was lugging an extra two hundred pounds on top of his one hundred seventy-pound body. He let out a huge breath, hoping to draw on some more energy. The move caused him to lose more from the exhalation, and he needed to follow it with an even larger breath. However, the greater breath came in too quickly, and it made his head grow lighter. His knees weakened under the weight.

None of the kids dismounted. Instead, some older children, more like young adults, came rushing up to his side. They, too, pounced on him with delight. The weight was far too much for him to handle. His knees collapsed, and he hit the ground hard. The quick change in altitude made him even dizzier.

The young adults laughed as they helped the kids roll him along the ground. Some had difficulties holding their drinks as they playfully tortured him and spilled small amounts on his body, staining the fur with cola. Sammy gritted his teeth at the surreal circumstances engulfing him. Where did these people come from, and why did they have to come here? The young adults jumped on his belly and drummed him on the chest and crotch as hard as they could. He knew his bruises were getting bigger now. And his breath quickly escaped him.

“I said get off me,” he shouted. He tried forcing the few of them off his torso.

All of them refused to move; rather, they swarmed him, playfully beating him into madness. Enough was enough.

Sammy ripped Bubby Bear’s head off his shoulders and revealed to them the heat flushing from his real cheeks. The action scared the little kids to panic.

They ran off yelling for their mommies and stepdaddies. The young adults, on the other hand, stuck around.

“Hey, you’re not supposed to show us who you are on the inside,” sang one of them. “Put the head back on and entertain us.”

Sammy used all of his strength to push the few who were sitting on him to the ground. They laughed as they rolled away from his body.

“I’m not here to entertain,” he said. “I’m here on business. I couldn’t care less about my stupid bear head.”

As he finished his thought, Sammy quickly stood up, but it allowed for too much blood to rush to his brain at once. He blacked out in front of all the happy people.