But, for the average storyteller, Microsoft Word’s templates are—how shall we say?—quite limited:

Sure, Microsoft has made the effort to recognize the average novelist by providing a manuscript template that’s great for those who aspire to publish traditionally. For a $300 piece of writing software, it had better do at least that.

But Scrivener has that exact same template, too, and it offers that template because it knows it’s made for writers, not just for business professionals and academics who think a thesis is supposed to be nothing more than a list of three arguable points and a loose interpretation of how those points fit together. 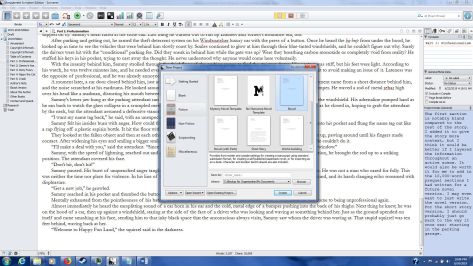 Yes, Scrivener considers that writers of fiction (and non-fiction and scriptwriting) want the templates to do the job right, but they also want the tools to organize the job so that the scenes and chapters fit into the manuscript format seamlessly. They also want to do all of that stuff while having the freedom to cram all of their research materials (including character and setting sheets and templates) into its own folder where it cannot corrupt the story document, nor can it get lost through the unfortunate process of misnaming the research files and putting them in the same place where you put all of your old college literature critiques from 20 years ago, which you think might be in My Documents 1998_a2_crit lit alpha, but it could also be in that folder you refuse to open because it’s labeled “In the Event of My Kidnapping,” which you created during your intense paranoia stage (or your quarter-life crisis) in the early 2000s (not to imply that I would ever do such a thing…).

But, Scrivener goes one step further: It allows you to compile that manuscript into the appropriate format and includes self-publishing formats for e-books, if you’re inclined to skip the process of pandering to the traditional publishers.

All of this for a sixth of Microsoft Word’s cost.

In Part 5 of my yWriter vs. Scrivener series on YouTube, not to be confused with my Microsoft Word vs. Scrivener series that does not yet exist, I show off the fiction template and how it can help writers stay organized within their chosen parameters. This part will also serve as a foundation for tomorrow’s follow-up video, where I explore other templates in Scrivener.

One thought on “The Fiction Template on Scrivener (yWriter vs. Scrivener, Part 5)”